Sharing the Road with Whales & All Marine Mammals 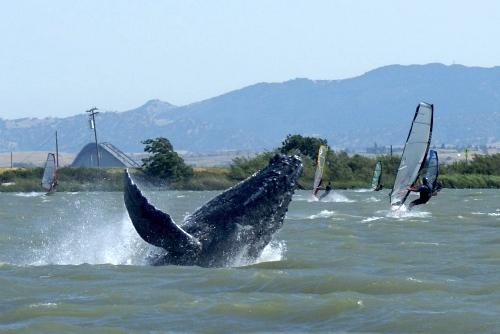 While here they face dangers from disturbance, shipstrike, disorientation, entanglement in fishing gear, stress from harassment, and skin disease.

To prevent disturbance, the Farallones National Marine Sanctuary advises watching for a whale’s blow, or exhalation, which looks like a puff of smoke. Humpback and gray whale blows are bushy, and rise to about 10 feet. Be aware there may be whales nearby that you do not see!

Boaters, including paddle boarders and kayakers, should not:

Remember: Marine mammals - whales, dolphins, porpoise, seals, sea lions and otters- are covered under the Marine Mammal Protection Act, and some, additionally, under the Endangered Species Act. Power boaters and paddlers must resist temptation to float alongside or other wise interfere with our whale migration. The Marine Mammal and Protection act defines minimum distances and harassment and the corresponding fines of up to $10,000. To read about what constitutes harassment, click here.

Never attempt to free a whale yourself. Injured marine mammals should be reported to the Marine Wildlife Rescue regional agencies.  Check this information at https://www.parks.ca.gov/?page_id=29224(under EMERGENCY CONTACTS - MARINE WILDLIFE RESCUE).

Heading to the beach this summer? Remember to respect the wildlife you may encounter as you recreate in the beach and ocean. As a reminder to beach goers and boaters, please stay at least 50 feet away from elephant seals, sea lions, seals and other species protected by the Marine Mammal Protection Act. With the breeding season for sea lions occurring from late June until early August they can exhibit aggressive behavior defending their territory or protecting their pups. For your safety and theirs, do not take a selfie with them. They prefer you take photos from a distance.

Should you have an encounter with marine mammals, make sure you “share the road” and or the shore and maintain a respectful distance from our amazing marine wildlife.

See this great video about whale watching tips for boaters!